Where are you? Yahoo! Fire Eagle

Hello,
the Twitter question was "What are you doing?". The new question is now "Where are you?"

Yahoo! has launched a sort of social application called Fire Eagle for updating your location and share it across other web services.
Pubblicato da Luca Bruno a 2:24 AM No comments:

Email ThisBlogThis!Share to TwitterShare to FacebookShare to Pinterest
Etichette: social

Hello,
I'm listening to the Industry Misinterpretations podcasts (though my English is so poor to understand only a few words) and now they reached the century mark. They're managing an account on Podcast Alley.

Email ThisBlogThis!Share to TwitterShare to FacebookShare to Pinterest
Etichette: smalltalk

Hello,
lately I've been interviewed by the new clubsmalltalk. Hey, I know, I'm not so good with English ;)
I'm glad of this, thanks to Hernan Galante.
Pubblicato da Luca Bruno a 4:05 AM No comments:

Compiz with ATI RS480 on Debian

Hello,
after years that compositing has been introduced in our desktop, it's finally come the time to try it.

Uninstall fglrx
My video card is not supported very well with Mesa 7.0.x, in fact I've been using the fglrx driver for a long time.... until now!
I had to manually dpkg --purge all the related packages.
Now it's better to rmmod fglrx.

Install mesa 7.1 from experimental
On #compiz-fusion some guys hinted me I should have used Mesa 7.1rc because of recent improvements on my video card. The only way to get such version was to include experimental sources.
Ok, no problem, if it doesn't work I can downgrade back to the previous one.

Upgrade xorg to experimental
But there're still problems, I had to upgrade to the latest xorg in experimental because of mesa compatibility. In fact AIGLX couldn't load DRI drivers because of missing symbols.
I had to dpkg -l|grep xorg the install the one by one. I did pray for everything to work, really.
Now backup xorg.conf and go ahead with X -configure.

Install compizconfig-settings-manager and compiz-fusion-plugins-extra
For some reason, the first time I've tried running compiz it's gone Segmentation Fault. On the IRC channel they hinted me to install the crash handler plugin to back track the error. After installing such packages, magically compiz --replace worked!
Now I have a GNOME Desktop with the Blue-Joy theme and the Avant Window Navigator.

Everything both nice and unuseful, but now I understand how eye-candy fancy stuff can change your desktop. 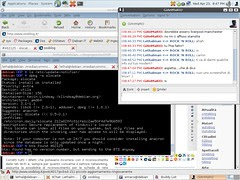 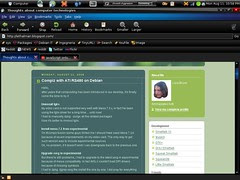 iStream
Originally uploaded by Lethalman
Very useful applet for listening to the radio. It lacks a perferences dialog, but it's still nice.
Pubblicato da Luca Bruno a 10:24 AM No comments: 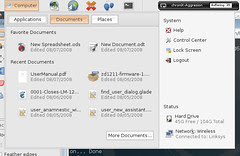 Gnome main menu
Originally uploaded by Lethalman
Hello,
while I was playing with apt-cache I've discovered a new kind of main menu in GNOME. It's being developed by SuSE. It feels nice, robust and innovative.
The screenshot is showing the documents tab.
To install, aptitude install gnome-main-menu and add the new applet.
Pubblicato da Luca Bruno a 10:09 AM 2 comments:

Hello,
I've been using qemu a lot lately because I'm creating an usb hdd with debian live.
The image contains a system running postgresql, development packages for gtk and python and gnome-core . All this ends up loading in more than 5 minutes, this is really boring.

Then I begun looking for a faster virtualization system, and found KVM. Unfortunately my processor hasn't the right flag for it.

Finally I found kqemu, which is a module for the kernel that speeds up a lot qemu. I never thought it could speed up things...... so.... much!
Let's install it:

That's it, for those who owns an amd64 processor, this is the right way to use kqemu:

The image now boots in 33 seconds down to the bottom init scripts, and GNOME works only with a slight delay but it's definitely a great speed up. With the real machine, I enter gnome in about 40 seconds.

Keep going the good work Qemu team, and thanks as usual to everyone who helped me on IRC.
Pubblicato da Luca Bruno a 9:07 AM No comments:

Email ThisBlogThis!Share to TwitterShare to FacebookShare to Pinterest
Etichette: debian


What I've done is to remove the source and its created firmware, with the one shipped with testing and unstable (bug #411912):

Now try to detach and reattach your usb pen and everything should magically work.